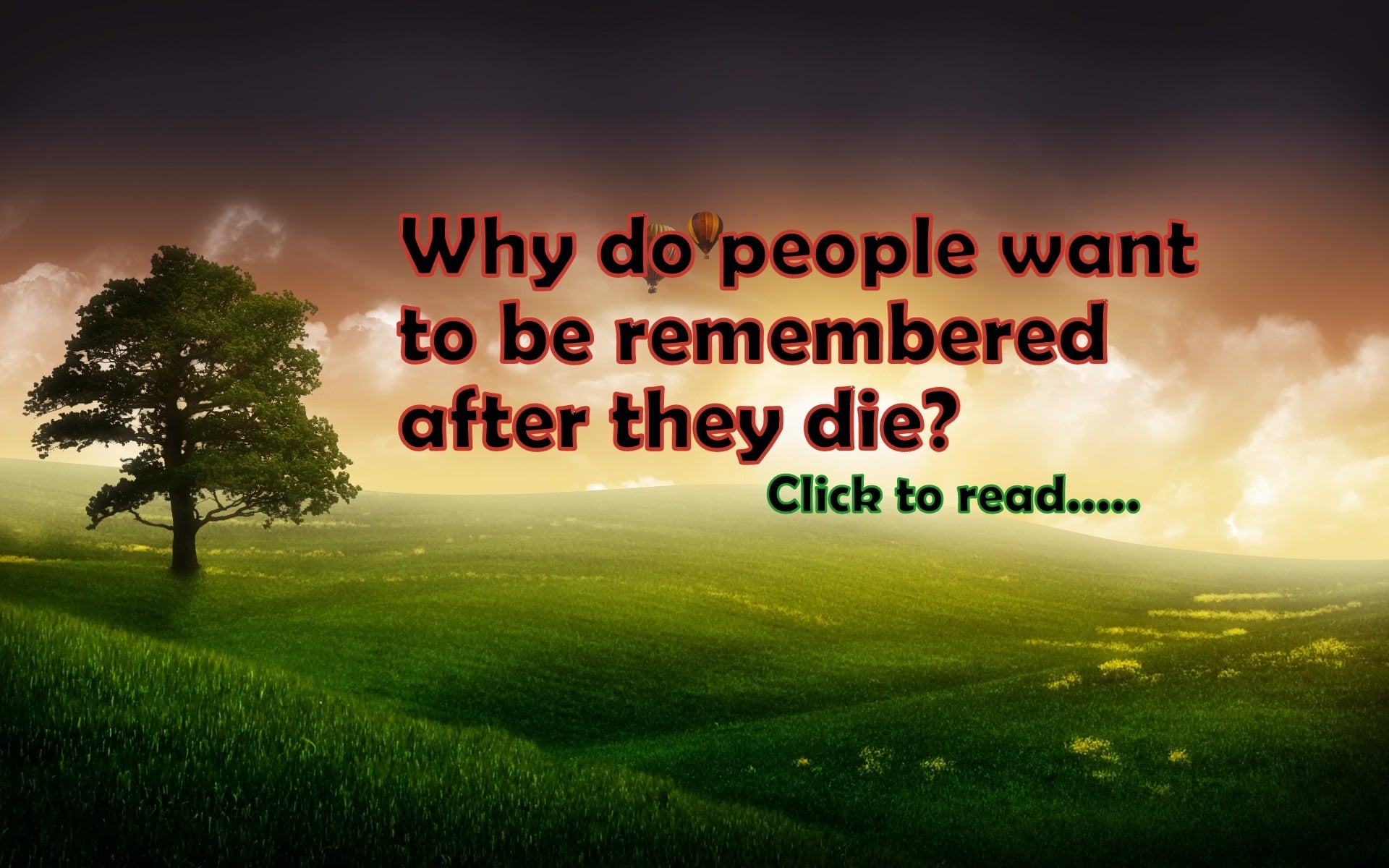 Why do people want to be remembered after they die?

The people want to be remembered after they die due to deep attachment. Attachment means the feeling of belongingness to all the objects that you collected and remain involved throughout life including your house, children, food and eating habits, wearables, and much more.

The Power of Illusion

The Law of attachment is the law of nature that remains in the order due to the power of illusion.

Until the cosmic science is hidden by the illusion we call it a miracle or nature and when GOD unfolds the nature it becomes super most Cosmic Science for an intelligent being, spiritualist, or a devotee.

Why do people want to be remembered after they die? The wish to be remembered after death is due to the power of illusion or “Maya Shakti”.

The power of illusion creates attachment towards the worldly affairs and sensuous pleasures, including the desire to love and to be loved and to respect and to be respected by the family and the society.

This is the power of illusion why we take care and love to our friends and family members otherwise, no one is related to anyone. Alone we came, alone we exist, alone we go, and alone we are responsible for our actions.

The place where Illusion is not Present

The illusion is present everywhere except one place that is cremation ground.

The Beauty of Illusion

Not only human beings but Gods and Goddesses also whenever incarnated on the earth planet are influenced by the illusion.

So, to run the life and nature with harmony, love, passion, and enthusiasm this illusion is crucial otherwise, the song of life will be silent, colors from the world will be faded, the life will be dull and off absolutely.

The beauty of life will be over. Lives will seem to be dying despite breathing.

Why is the future hidden?

The whole play of life and death is due to the power of illusion. This is the illusion, why we love family, money, pleasures, and much more.

The feeling of attachment towards the world and the senses is the main cause of why people want to be remembered after death.

If a person knows that he/she will die on a certain date or time, the feeling of attachment to the world and worldly affairs will also die, this is why GOD keep all this data hidden from the human being.

This is the attachment or illusion why we are revolving in the cycle of life and death.

In some cases, when this illusion becomes unfold person start to detach from friends and relatives and reached in the state of renunciation. Some people have gone through the state of detachment too.

Read- 15 Poofs that you are  incarnated so many times

Such people remain detached throughout the lifetime of all the life pleasures including the desire of fame and to be remembered after death.

The state is called “life-free-state” or “Jeevan Mukta Awastha”. Such souls don’t care to be loved and cared for during the life and afterlife too.

You may visit the link given below to know the mystery of life and death:

Why the cycle of life and death?

“Illusion or the feeling of attachment makes lifecycle active and beautiful.”

“It is the “power of an illusion” which fills love, passion, beauty and music in the life.”

Read – Why do people afraid of dying?