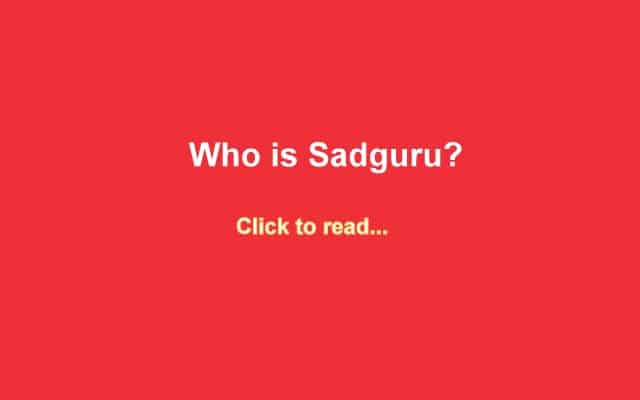 Sadguru or Spiritual Advisor is the person who is directly linked with spiritual energy.

Sadguru is one whose divine energy (Kundalini shakti) is awakened to some extent.

What is the meaning of Spiritual Advisor, Masters (Siddhas, or Gurus)?

To be a spiritual master or Sadguru is not an easy task. The same to be a disciple is also not easy.

To be a disciple, it is must having the following virtues in a person:

The relationship of spiritual master and disciple is purely divine, based on soul relationship under the guidance of divine energy.

In fact,  both disciple and Sadguru or spiritual master come on the earth to fulfill some undischarged duties and after completing the duties they become one and dissolve in the infinite energy forever.

Spiritual Advisor or Sadguru and Disciples

When a poor people visit such so-called Sadguru ’ to fulfill worldly desires and these Sadguru attract innocent people in order to get the following:-

In fact, these so-called Sadguru and Siddhas are smart businessmen and educated magicians.

They make fool to innocent people by showing their magic of the eyes, words, and hand tricks.

2. Who is a real Spiritual Advisor (Sadguru ) and a real disciple?

The real spiritual master (guru) is Adi Guru Lord Shiva only or a person who is self-realized. A self-realized soul can be a guru with the grace of God.

The relationship between Guru and disciple is eternal from the first incarnation to the last one when both the souls dissolve in one another and get liberation.

3. What is the secret of magic?

Recently, this has become common to give shows of acquiring objects like pictures, necklace, garlands, rings, rudraksha, etc., from the air and give them to the innocent audience or people by the Siddhas, Gurus, or the person who wishes to be called as a Guru or even God.

To present the objects or items from the air before the audience is totally magic based on physics, hypnotism, and hand-tricks.

These persons control their clients by the power of words and eyes too.

Power of Eyes and Sadguru

Eyes are the window to the soul. Eyes have a tremendous power anything can be controlled and conveyed by the eyes and these people know the tricks to control through the eyes.

Not only eyes, but words also have unbeatable energy.

Power of words and Sadguru

Word empowers both listeners and speakers. Everything can be controlled via words.

All these people know the tricks and techniques on how to control the person sitting before them.

The same tricks what these Sadguru shows are also shown by the stage magicians, but these magicians never claims to be a Guru or Siddhas.

Some of the real Sadguru such as Budha, Ram Krishna Paramhansa, Jesus, Guru Nanak didn’t show such magic before the audience however, they have occult powers that can be presented before the people to influence them, but God never wishes to show these powers before the world in any case in any way as these powers are basically based on Tantra Shastra which is a hidden science.

This is the reason, why so much chaos, diseases, imbalance are seen in the world as everything takes its cost. Tantra means karma or kriya. The whole Brahmand is action-oriented or “karma pradhan”.

God made the world to play so, play your the best role,

learn the lessons that life gives you and go-ahead for further journey.

Who is Sadguru of all?

The real Sadguru is almighty God or the Adi guru, Lord Shiva. If anyone wants sadguru in life make guru to Lord Shiva and worship lord Shiva as a Guru.

Lord Shiva is your true Sadguru who lives in you and guides you constantly to uplift your energy.