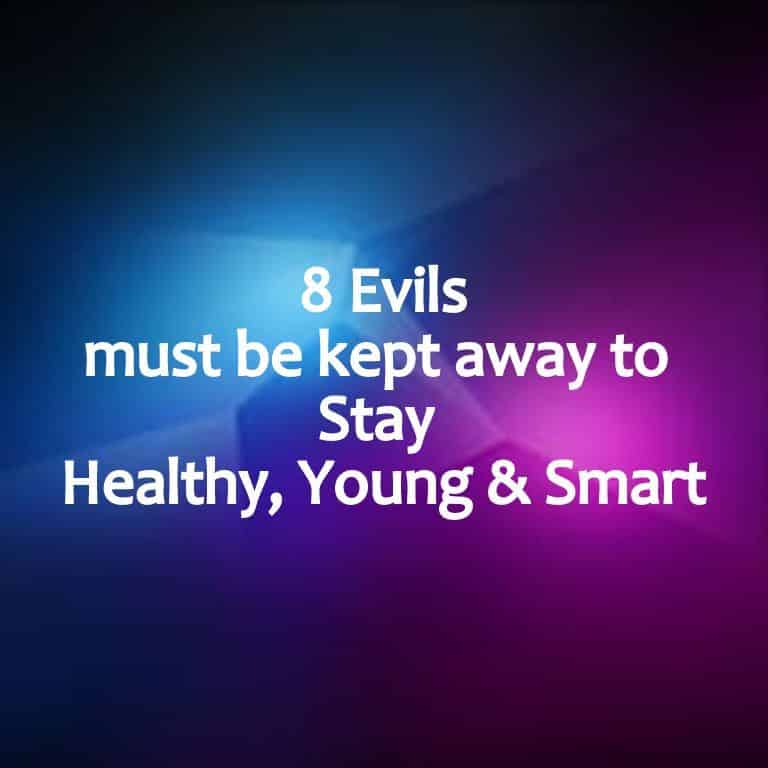 8 Vices must be kept away to become Healthy, Young & Smart

A healthy mind lives in a healthy body, the same healthy mind keeps the body healthy. When a body suffers, the mind also suffers, similarly, when the mind suffers, it affects the body.

Therefore, to become healthy, young, and smart, one should know the secret to keep the mind in a sound and healthy state.

A human being is a microcosm of the macrocosm or cosmic energy and composed of five basic elements that are earth, space, air, water, and the sun.

Five elements are combined into three basic energies known as Vatha (wind), Pitta (bile), and Kapha (phlegm), which are present in varying degrees in everyone.

“Tridhatus” presents in every cell, tissue and organ, and govern all biological and psychological activities. These three, in a balanced state, give sound health and in unbalanced state produce diseases.

“Tridosha” are responsible for all our mental, physical and psychological actions from our taste, choices, moods to consciousness. Every tiny thought or act is regulated by these “Tridhatus”.

Vatha, Pitta, and Kapha govern the creation, maintenance and destruction of tissues and the elimination of wastes. In balance state they give soft and noble traits to human being like:

when a balanced state is disturbed by improper diet, stress, bad conduct and other factors, they trigger and rise to negative traits like

When desires arise, it produces strong air energy in your nervous system.

The air does not move smoothly and there may be hyperventilation. Ignorance produces excess of water.

Therefore, when one of the three elements is strong, it causes its corresponding element to get strong and create problems or even death of a human being.

Self-restraint (Control of the senses) is must to keep one healthy and happy.

If mind and heart are pure and controlled, one will remains happy and gets longevity.

Uncontrolled senses and mind, and impure heart are the cause of troubles and miseries.

8 Vices must be kept away to become Healthy, Young & Smart

Which one of the evils is responsible for which type of disease, is discussed below:

Self-indulgence in senses like tongue, eyes, ears, sex, etc. causes disturbance in the balanced state of Vatha, Pitta, and Kapha.

One should not eat more than the need of the body. Uncontrolled eating and drinking habits increase fat contents and other extra chemicals which produce diseases.

Such people have no control on other senses too.

Do you wish to know how to avoid becoming a dump in the future life?

Some people speak without thinking and become the cause of hurting others. Such people become dump in the next life, says Vedas.

Similarly, due to uncontrolled use of other senses one has to face various miseries and disappointments in the same or some future life.

2. Falsehood or telling a lie (“Asatya”)

How telling a lie make you ill?

Some people speak lie a lot without giving any thought and any need of it. These types of people become habitual to speak lie.

Speaking a lie destroy the life force, luster, heart and mind all. Such types of people easily fall ill. Heart fail, mental disorder, stone and paralytic attack occur due to telling a lie.

If person speaks lie to console others or for the benefit of others, has no harm but falsehood for selfishness, due to habit formation or for hurting others is horrific and such type of practices must be restrained as it become the cause of miseries in the life.

What you are receiving now and received till date, all are your deeds only.

What you give, the same you receive. Hence, what you wish to get from others, same you should give to others.

How egoism spoils body chemistry and makes you ill?

The main cause of sin is abandoned egoism. It disturbs vatha, pitta and kapha and person becomes the victim of various spiritual, mental and physical disorders.

Egoism (Hindi: “Ahankara”) is the greatest enemy, it destroy peace of mind and rise anxiety and stress, which increase blood pressure, diabetes etc.

Egoism (Hindi: Ahankara) is the root of various vices. One who is free from egoism (ahankara) enjoys peace of mind and bliss.

How the feeling of jealousy disturbs the liver?

Feeling of jealous and hatred disturbs bile (pitta) element in the body. Such people effort to produce harm to others. They try to let down others in the public.

How the feeling of pride disturbs the air and makes you ill?

Feeling of pride destroys phlegm in the body and person suffers diseases like bronchitis and breathing disturbances.

These people become fatty and easily become the victim of acidity and asthma.

How anger destroys the body chemistry?

An angry person may harms others or not, it depends upon the destiny of the other people, but such person harms him or herself.

Angry person destroys its mind and body both. Due to anger mind needs more blood pressure, which harms life force. In the long run, such people easily get diseases like blood pressure, diabetes etc.

Adrenocorticotropic hormone ACTH, from the adrenaline gland, is secreted in response to anger, which then in turn help us to deal with the stresses occurred due to anger, but it gives the sign of aging on the body and also affects memory.

So keep you healthy, young and smart, avoid anger at all. It not only makes you dull and aged, but also disturbs surroundings around you.

These people have no soft feeling and always hurt others. They easily become the victims of heart diseases and lose longevity due to disturbance in Vatha, pitta and Kapha.

How the act of fraud makes you ill?

Fraud is another form of violence. Such people use cunningness and sometimes do a black-magic to harm others and always make strategies to disturb and produce harm.

They disturb their vatha, pitta and kapha and easily fall ill, suffer from stress, anxiety and insanity.

If you suffer from a disease, it proves you have done something wrong in the present or some past lives. It is our deeds which harm us.

No one can hurt you except your karmas. Karmas follow you like your shadow. So to live happily spread happiness by your deeds and soul.